Skip to the end of the images gallery

Skip to the beginning of the images gallery

Ulano A & B Developer 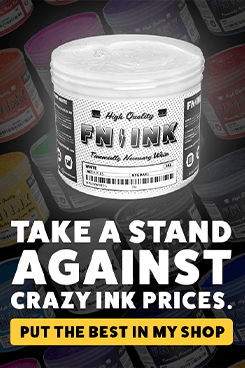 Ulano A & B Developer Powder for Gelatin Based Indirect Photographic Films


Because Ulano A & B Developer bottles are tightly sealed, the contents will not degenerate in storage (unlike hydrogen peroxide). This assures absolute freshness and proper concentration of the developer solution. Ulano A & B Developer Powders contain special buffers that minimize the effect of mineral content in your water. Pre-weighed, pre-mixed, fresh-until-opened Ulano A & B Developing Powders effectively eliminate any variables in the developing step when you process indirect system gelatin-based films.

ULANO A & B INSTRUCTIONS
Step 1: DISSOLVE THE DEVELOPER POWDERS
Select pint, quart, or gallon sized bottles of A&B Developer Powders based on the size of the stencil (and developing tray) and the need to cover the film with a minimum of 1 - 2 inches (2 ½ - 5 cm.) of developer solution. Measure out a pint, quart, or gallon of water. When opening A&B Developer Powders and adding them to water, make it a rule to tap each bottle four times to be sure that all the powder releases from the bottle. Dissolve the "A" Powder first, then add the "B" Powder. (This hastens the dissolving of the "B" Powder.) Stir the developer solution or, for faster dissolving of A&B Developer Powders, shake them with the water in a covered jar. The developing of indirect system stencil films, like all chemical reactions, is hastened or slowed by changes in temperature; developing times are predicated on developer that is within a normal room temperature range--between 64° and 75° Fahrenheit (18° - 24° Celsius). Dissolving A&B Developer Powders in water causes an exothermic reaction, lowering the temperature of the solution. Thus, before developing Ulano gelatin-based indirect stencils, be sure that the developer solution is, indeed, within the recommended temperature range. As the film is light sensitive (to upper-UV and visible blue light), work under yellow safelight conditions or subdued lighting.

Step 2: DEVELOP THE FILM
Developing completes the hardening reaction initiated by light energy during exposure. Uniform, even wetting of the entire surface of the film assures uniform stencil thickness and hardness, especially for critical work. We do not recommend trying to place film in a developer tray that is already full of developer.

Place the film in a dry tray, emulsion side up.
Tilt the tray slightly, then pour the developer over the surface of the film quickly and evenly.
Rock the tray occasionally during developing to circulate fresh developer over the surface of the film.
Develop Hi-Fi Green, Super Prep, Blue Poly, and Red TI for 1½ minutes (90 seconds).
Develop Ulanoprex for 3 minutes (180 seconds).
After the first piece of film has been developed, some light-sensitive emulsion floats off into the developer, making it light sensitive. To prolong the life of the developer, keep the developer tray covered when not in use.
Note: Do not store developer solution in a closed container after it is used. It will release oxygen under pressure. Discard used developer solution at the end of each workday.

TANK DEVELOPING OPTION
Developing indirect system photographic stencil films in a specially constructed tank is a useful option, especially for the production of large stencils--with the additional advantage that the developer can be used for several days because it is protected against light and continuous contact with air. We suggest the use of a piece of rigid plexiglass with one side "frosted" and onto which the exposed film is taped. (After developing, the plexiglass serves as a buildup board during the adhering step.) A counterweight arrangement will make it easy to lower and raise the plexiglass and film in and out of the developer bath.

PLEASE NOTE: A & B Developer Powders are supplied in sturdy plastic bottles and each box contains equal amounts of A Powder and B Powder Bottles.